Translations on the following buttons:

This tender seeks companies or individuals interested in extending international the PCT patent application (152 countries) for entering the national phase of patenting in the United States.

Winners of the tender: the bidder can be a single entity or there can be several entities, dividing the percentage of the patent application license.

Division of territory according to license percentage

The territory of the United States will be divided according to the percentage of the patent license proportionally, delimited by number of inhabitants. For example, given that the current population of the United States is 325.7 million people, the 50% license percentage represents a territory composed of 162.85 million people, which can be distributed in separate states.

It is IMPORTANT that at the moment of bidding, the bidder indicates in the field “notes of the order” the area/s of preference of exclusiveness within the country.

The bidding process is made in the bidding link that appears on this page. The tender is in English language and in American dollars.

The amount to bid is entered in the box below the collection bar, and then click on “Back Campaign”. 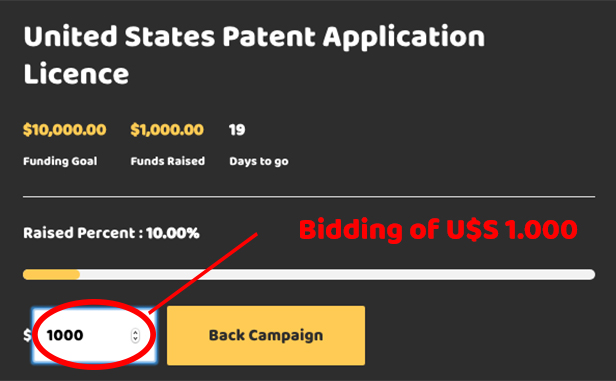 You will proceed to the checkout where you mast enter your data and select the payment method.

Paypal and Bank Transfer. If the user does not own a Paypal account, it can pay by credit card directly through that option. 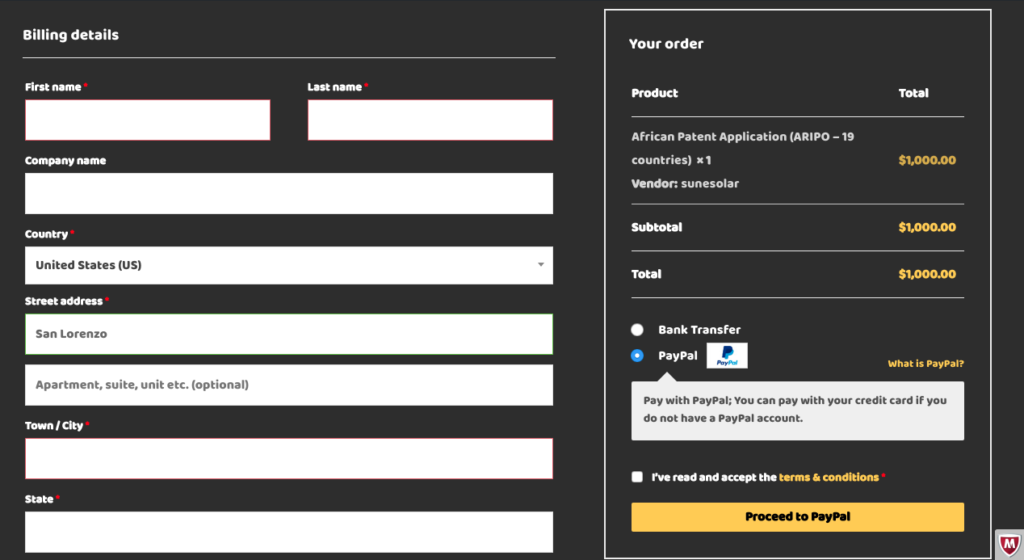 IMPORTANT: in the field “Order notes” the bidder mast choose a preferred area of __exclusivity, such as the states of New York, California, Florida and Washington, etc. The reserved areas will be published immediately. In case that for any reason the bidder has not seen the reserved areas in time and is selecting an area already reserved, he will be notified immediately to inform him of the available areas.

What happens if, for example, the tender already has the 60% bid, composed of a bidder of 10% for US $ 1,000, a bidder of 50% for US $ 5,000 and then comas a bidder who wants 100% for $ 10 .000? In that case, the first bidders are ones that holds the priority (reserve) over their 10% and 50%, being the only ones who can sell their parts to the new interested bidder who wants 100%. All parties (reserves of 10%, 50%, and interested in 100%) have time to negotiate such transfers of percentages until the expiration of the term of the tender. After that term, the negotiation of parties will be done outside the tender.

What happens if the bidders do not reach the total tendered amount of US $ 10,000? There are 2 options in the terms and conditions for this tender:

The tender bidding for each backer would be invested in a purchase of solar chargers. The backer would be benefited for wholesale price, with discounts starting from 30% up to 40%, depending on investment amount.

At the time of the bidding process, the backers can invested their parts to make a grouped purchase with other backers, The backer would be benefited for wholesale price, with discounts starting from 40% up to 60%.

All payments are protected by the mast advanced online security certificate, the EV PremiumasSL Certificate, adding the protection of the encrypted payment methods of Paypal and the bank for the transfer.

About the patent of the charger

?To request information about the Sune charger patent in Argentina and its subsequent presentation in PCT patent, it is necessary that the user be register as a buyer on the page sunesolar.com and then we will him copies of the patents filed via email.

Register as a buyer

You can register as a buyer by clicking on “Login” in the main menu. Registration is free and includes accepting terms and conditions, plus accepting the privacy policy. 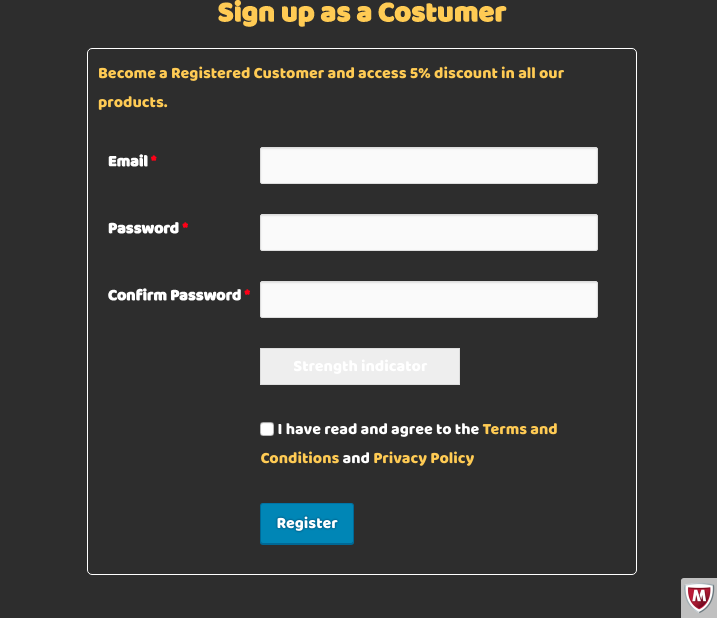 About the patent license

Once the bidding has been completed and the tender amount has been reached, the bidders will sign a patent license contract that will be mailed to the corresponding countries, where the bidders mast sign, certify and legalize under a certification body endorsed by the local regulations of the bidders countries.

Since the moment of the patent application in the national phase, the licensee has the right to 50% of the royalties on its percentage, counted as 50% of the profit before taxes.

What happens if a third party tries to copy the product? Licensees have the right to claim royalties from those who copy or commercialize the Sune charger without authorization, though the judgment can be executed only from the moment the patent is granted.

Costs for judgments before copies: they mast be faced by all the licensors, who until the year 2037 have the right to partially or totally sell their license rights to large companies that can afford the costs of the judgement.

What is the term of enjoyment of royalties? From the moment of presentation of the patent application until the year 2037.

About the granting of the patent?

It is important to take into account the fact that, like any patent application, although it implies a priority over the patentability of the product, it does not guarantee the granting of the patent.

About the current state of patenting

The patent application was made through the largest and mast important patent and trademark study in Argentina, which conducted the search of antecedents and according to the prior art in the material, confirmed the patentability of the Sune charger within more than 100 patented chargers . While there are many types of patented solar chargers, none complies with the characteristics of the Sune charger for practicality, adaptability, thermal safety among other advantages.?

The European patentability review reports observations that according to our patent study, are not severe and can be saved through claims to submit at the moment of applications in national phases. It is very rare that a patent application will not have any observations under this study, so that the Sune charger patentability is under normal and ongoing situation.

The “Argentine Technological Fund” of the National Agency for Scientific and Technological Promotion (ANPCTyT) under the Ministry of Science, Technology and Productive Innovation of the Argentine Republic, has evaluated the patentability of the presentation of the Sune charger, conducting background research, study of technical feasibility that has resulted in being approved by them, denoting the character of novelty with respect to previous art and correct technical development of the patent.

The patent costs included in this tender are the following:
1) Filing
2) Late filing
3) Formal examination
4) Publication
5) Examination Request
6 ) Office Actions
7) Grating Fee
8) Annuities
9) Validation Fee
All this costs would be covered, if applicable, will be covered within the term of 3 years. From that time on, all costs i.e. annuities would be in behalf of the licensee.

1) License Agreement: The winners of the Sune charger patent license tender in the different countries will sign a License agreement that defines conditions, terms and royalties of which they may enjoy.

What does the manufacturing process consist of? The manufacturing of the Sune charger is a purely textile process and can be manufactured in any garment factory, as long as they have minimum double drag machines, riveters and stamping machines.

The manufacturing process consists of the following steps: 1) cutting fabrics and textile inputs? 2) stamping of logos on the fabric and panel?3) sewing and folding of pins 4) printing of labels and cutting of boxes 5) packaging.

Products sent by Sune to the country of manufacture: a) solar panels with solderes cables b) plastic injection case.

Products that are purchased locally in the country of manufacture: a) fabrics b) textile inputs c) battery d) labels and stamas e) packaging.

3) Commercial distribution contract: It is the contract signed by the wholesale distributors who will buy the charger with their logos. The distribution may or may not refer to the manufacturing contract in the country of reference.

4) Commercial agency contract: it is a contract that defines the commassion for sales of commercial agents who wish to work in a tertiary manner to sell on behalf of the licensees, for which they obtain a commassion for their sales and place orders to the licensors, in this case SUNE SRL The licensor is obliged to render absolutely all sales orders.?You can view the contract models through the following link: